Application package software is a collection of software programs that is developed for the purpose of being licensed to third-party organizations. Although

a package software may be tailored for a user’s specific needs through parameters or tables, the software itself is not developed specifically for an organization. So, users do not own the source code and have no way to modify the embedded SQL statements for performance tuning purpose. There are a lot of application packages built on Oracle RDBMS such as Siebel, PeopleSoft JD Edwards, SAP and so on. In order to help application packages’ users, Oracle provides some features for helping users to tune their SQL statements without the need to change their source code.

It is a profile generated by Oracle SQL Tuning Advisor. A SQL profile contains corrections for wrongly estimated statistics, auxiliary information. Therefore, SQL profile just guides the optimizer to a better plan, but they do not guarantee the same plan each time the statement is parsed. For certain SQL statements, no matter how good the statistics are corrected, Oracle SQL optimizer is still not able to generate a better plan in specific environments. For these kinds of SQL statements, human intervention is necessary, but SQL profile is not a convenient tool for developers to force Oracle to pick up a new plan without changing the program source code.

Due to the Oracle environment changes or Oracle database version upgrade, it might target Oracle SQL optimizer to generate new plans for certain SQL statements. If it is not good, and we need something to preserve the old plans for the new environment. To achieve SQL plan stability, stored outlines was the major tool in earlier releases of Oracle Database. This feature is still supported in Oracle Database 11g; however, it might be depreciated in the future releases and replaced by SQL plan management. The mechanism of SQL Plan Baselines is to preserve the performance of specified SQL statements, regardless of changes in the database environment or release upgrade. Furthermore, create Plan Baselines manually for a SQL statement is possible, and this technique can help developers to guide Oracle SQL optimizer to generate a specific plan for a bad performance SQL statement. So, when Oracle SQL optimizer receive the same SQL statement next time, a better performance plan will be composed according to the new plan baselines stored in database. There is no need to change the SQL syntax in source programs.
For example, if you want to tune a SQL with execution plan-A that is currently used by Oracle SQL optimizer in your database, and you want to tune the SQL with Hints to make Oracle SQL optimizer to generate a new execution plan-B. What you have to do is to execute the tuned SQL with new Hints and use the following method provided by Oracle:

Execute the tuned SQL with Hints and plan B cached in SGA.

As the SQL plan baselines was designed to preserve the performance of SQL statements such as after the following environment changes:

You can see that it is not designed for the purpose of manual SQL tuning. There are also some additional limitations such as Parallel Hints is not supported by SQL Plan Baselines, you cannot load a Plan-B with Parallel Hints applied your SQL with bad performance of original Plan-A. Parallel Hints sometimes are very important for a better plan generation by Oracle SQL optimizer.

SQL Patches is part of the features provided by SQL Repair Advisor which is used to fix a SQL statement’s critical failures such as returning wrong result. The SQL Repair Advisor analyzes the problematic statement and in many cases recommends a SQL patch to repair the statement. The SQL patch is to influence the Oracle SQL optimizer to choose an alternate execution plan for future executions, instead of using the original problematic execution plan. There is a public API call to create SQL patches manually provided by Oracle Database 12c Release 2 onwards. The DBMS_SQLDIAG.CREATE_SQL_PATCH package can help users to create a SQL Patch for specific SQL statement for SQL tuning purpose. You can change a bad performance SQL statement’s execution plan without the need to modify the program source code as the following example:

If your database version is before Oracle database 12c Release 2, you must use this package DBMS_SQLDIAG_INTERNAL.i_create_patch instead. Both SQL text and SQL ID is able to be used for SQL hints injection. The injected hints for your SQL should be placed in hint_text input parameter. There is only one line of Hints text you can use for a SQL and there is no way to define your own query block name for any subqueries’ block. So, if your SQL has multiple subqueries and you want to instruct Oracle to do something in subqueries’ blocks, you must use Oracle default query block names in your injected hints text.
hint_text => ‘ INDEX(@SEL$1 EMPLOYEES) INDEX(@SEL$2 DEPARTMENTS) ‘
This hints text in the above example shows that @SEL$1 and @SEL$2 are default query block names provided by Oracle in the execution plan of the SQL. The Hints tells Oracle use index search for EMPLOYEES table in query block @SEL$1 and also use index search for DEPARTMENTS in query block @SEL$2.

Pros and cons of using SQL Patches to tune SQL

SQL Patches is more flexible to accept hints instructions without SQL Plan Baselines’ limitations, complex hints with parallel operations are normally accepted by SQL patches. There is no additional maintenance effort to tell Oracle to use the SQL Patches after it is created. Oracle will use the stored hints to optimize any SQL with the same SQL ID or SQL Text and generate a better performance execution plan. Furthermore, you can also use SQL Patches to disable a SQL with a destructive hints already written in a package application or even use it to control a bind-aware SQL execution behavior.

As the injected hints text must be placed in one text line and using default query block name only, manually compose a desire Hints to improve a SQL statement will be a difficult task for most SQL developers especially for complex SQL statements with many subqueries.

A tool to automatically create Hints and SQL Patches

There is only one tool in the market so far that is able to generate a better hints and create SQL Patch in a fully automatic way.
Tosska SQL Tuning Expert Pro is a tool for users to improve SQL performance without touching their program source code. Users can deploy different performance query plans for various sizes of production databases without the effort of keeping multiple versions of the program source, and it is especially suitable for package application users who don’t own the source code of their applications. The tool will try most useful hints combinations to tune your bad performance SQL statement, the best Hints combination SQL performance will be benchmarking side by side with the original SQL. Users will get the exact performance improvement without any guesswork or uncertain cost assessment only. 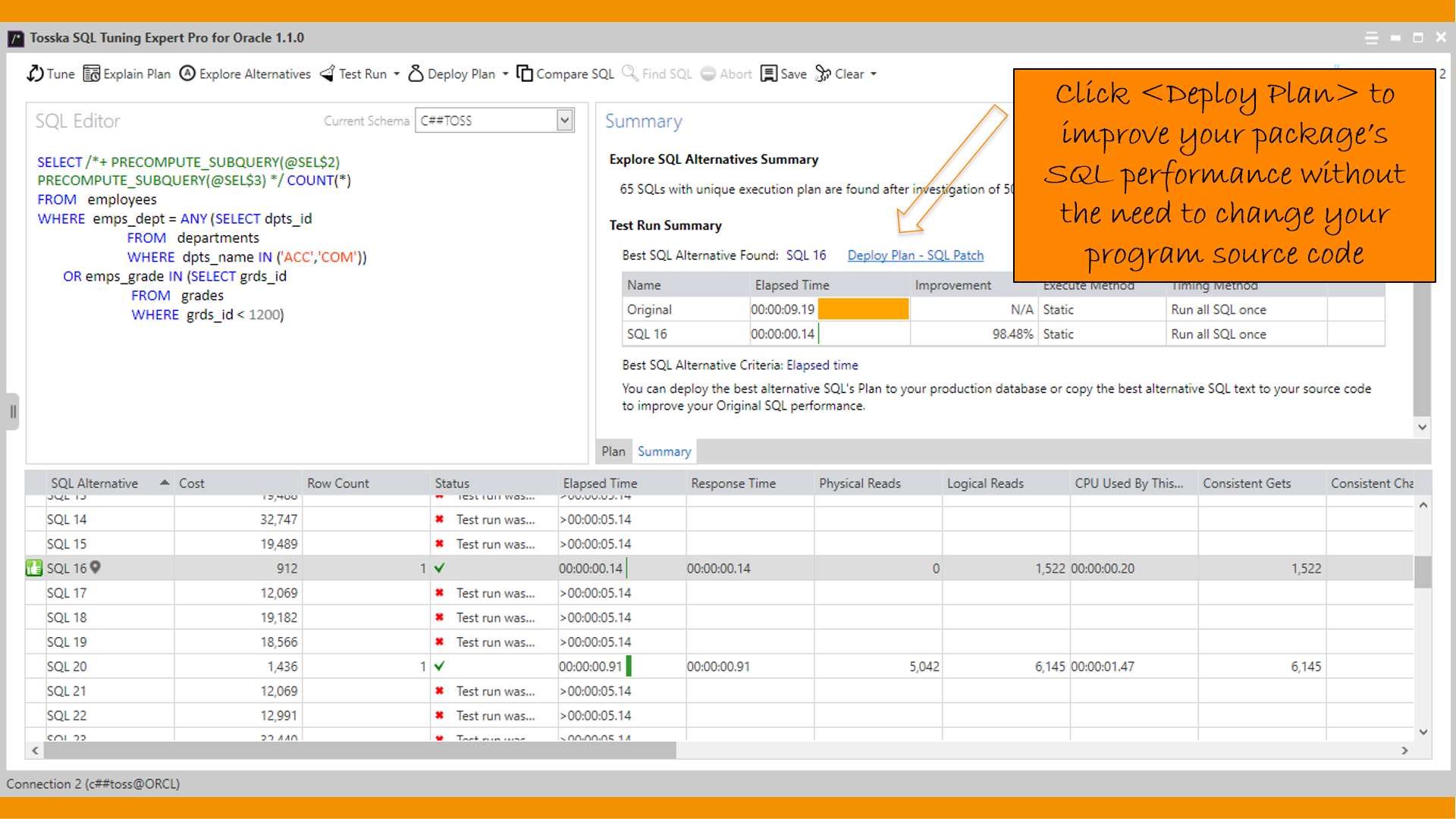 You can visit our website for product details
https://tosska.com/tosska-sql-tuning-expert-pro-tse-pro-for-oracle/

How OLTP database get advantage from In-Memory database?
An OLTP database is a transaction-oriented application which requires quick response time for each transaction, but it doesn’t mean that there is no complex SQL for online report or data consolidation during business hours. If these kinds of slow SQL statements are running simultaneously with other online transactions, the overall performance will be affected. If hardware upgrade is one of the options, you should consider using Oracle In-Memory as one of the alternative solutions.
Here is an example that shows you how an OLTP SQL statement gets benefit from using Oracle In-Memory database option.
The following is a typical OLTP SQL with all tables analyzed, the original execution plan shows an Oracle adaptive plan that Hash Join or Nested Loop will be decided during the initial stage of execution. The elapsed time of this SQL is around 1 minute and 35 seconds.

Let’s put EMPLOYEE table into Oracle In-Memory with a force hint and Oracle use it with “Table Access Inmemory Full” scan, the following benchmark shows that the “Auto 1” SQL took only 0.45 second to finish with more than 200 times faster than the original execution plan. The solution indicates that the introduction of a new “Table Access Inmemory Full” scan to the EMPLOYEE table has actually created a much better execution plan compared with the original one.

There is no need to put all tables into In-Memory for OLTP’s SQL
When using an OLTP database, we don’t want to introduce too much overhead to the online transactions by populating all tables into In-Memory. So, the goal of In-Memory SQL tuning for OLTP SQL is not to select the best performance solution, but the most cost-effective solution with fewer tables In-Memory tables but still acceptable performance improvement instead.
The following “Auto 3” solution with all tables are put into In-Memory, but the improvement is just 0.01 second better than the “Auto 1” which only requires one table to be put into In-Memory. Therefore, it is obvious that “Auto 1” is a much more preferable choice.